Ziegler: 100 Years of Building and Growing, 1914 – 2014 is the impressive history of a Twin Cities firm that helped transform the Upper Midwest during the past century. The book tells the story of Ziegler Inc., the Minneapolis-based Caterpillar® dealer that has marketed, sold, and maintained the big yellow construction equipment in Minnesota and Iowa for the past 100 years.

The book tells how William H. Ziegler opened a small office in Minneapolis in 1914 to sell industrial machinery and supplies in Minnesota. Ziegler: 100 Years of Building and Growing, 1914 – 2014 relates the role Ziegler played in introducing the use of Cat® tracked equipment across the Midwest and tells how that equipment was used to build the huge Fort Peck Dam on the Missouri River in Montana during the Great Depression, helped send a flood of Mesabi Range iron ore down the Great Lakes to the steel mills and defense plants that won the Second World War, helped build the ribbon of interstate highways across Minnesota and Iowa in the 1950s and 1960s, and was key to the creation of the modern industrial and agricultural infrastructure of Minnesota and Iowa during the past quarter-century.

Ziegler: 100 Years of Building and Growing, 1914 – 2014 is more than a business history. It is a story of the ingenuity and work ethic that has made the Upper Midwest one of the engines of the nation’s economy. 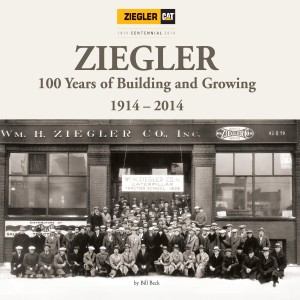