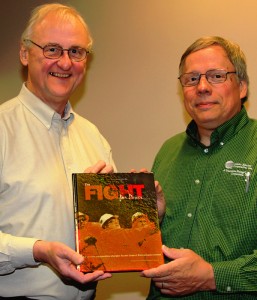 Co-authors Jim Krut, left, and Duane Kanagy display a copy of “The Fight for Power.”

“The Fight for Power: An electric cooperative changes south central Pennsylvania forever” was released in the summer of 2014 at the beginning of the cooperative’s 75th anniversary year. It was selected as part of the Council’s 2015 Spotlight on Excellence awards. Co-authors Jim Krut and Duane Kanagy spent over two and a half years researching and writing the 136-page work.

The book, available at any Adams Electric office, reveals the founding incorporators’ struggles to start the cooperative in August of 1940 as the nation was recovering from the Great Depression and gearing for war. It also outlines the many challenges that were overcome by those who helped the co-op grow over the past 75 years.

“We are proud of our history and pleased that Adams Electric’s role in changing this region for the better has now been well-documented,” said Steve Rasmussen, Adams Electric CEO/general manager. “This book is also evidence that electric co-ops have a unique business model that puts members first.”

Krut is Adams Electric’s former vice president of communications/community services who retired in 2009. Kanagy is currently the co-op’s manager of communications/community services. A total of 788 entries were submitted this year in the Spotlight awards program that selects the best work from among electric cooperative organizations in as many as 47 states.