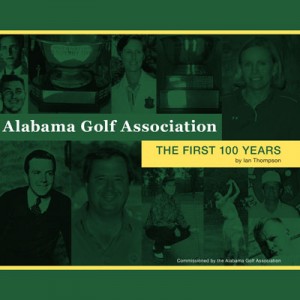 The Alabama Golf Association has had a storied past, which comes alive in Alabama Golf Association: The First 100 Years. From the early days of the association through almost one hundred State Amateurs, the reader is transported to yesteryear as championships are chronicled, characters introduced, and tales told from firsthand reports and many gleaned from newspaper stories of the day.

State Amateur champions with such memorable names as Files Crenshaw through Smylie Kaufman, and all the champions before, after, and in-between, are learned of here. The two Sam’s, Perry and Farlow, stand tallest with four State Amateur wins each, with Glenn Crisman, Scudday Horner, M. C. Fitts, and Jackie Cummings each claiming three titles. And, in more recent times, who could forget Bobby Wyatt’s magical 57 in the second round of the 2010 State Junior at the Country Club of Mobile? Without a doubt, one of the very best rounds . . . in the history of the game.

The AGA began in 1915, with the Women’s Alabama Golf Association coming along fourteen years later. Eighty-two Women’s State Amateurs have been contested with Kathy Hartwiger’s ten wins seemingly unassailable, and, who knows, she might just add to her tally. Others dominated their eras including Bee McWane’s six titles; Chris Spivey and Virginia Derby Grimes each with five; and June Mayson, Beth Barry, and Jane Reynolds all with four.

These two associations became one in 2010 and that merger has seen both go from strength to strength as one body conducting twelve championships, many USGA qualifiers, and a number of other tournaments.

What does the future hold? The next one hundred years are ready to be written . . .