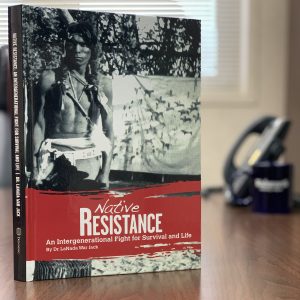 Native Resistance: An Intergenerational Fight for Survival and Life is Dr. LaNada War Jack’s unique exploration of the treatment of Native Americans by the US government and her own personal story as a revolutionary leader in the fight for the rights of Indigenous people. As the first Native American student to attend UC Berkeley, LaNada’s leadership helped establish Berkeley’s Native American Studies program. She was also the organizer and chair of UC Berkeley Native American Students United and a leader of the UC Berkeley Third World Liberation Front Strike. In Native Resistance, Dr. War Jack takes the reader on a journey through a first-hand account of the occupation of Alcatraz Island in 1969, the Standing Rock protests, and other important moments in Native American history. As noted by Kent Blansett, author of A Journey to Freedom: Richard Oakes, Alcatraz, and the Red Power Movement, “This is a must-read book for anyone interested in the takeover of Alcatraz Island or the Red Power movement of the 1960s and ’70s.”